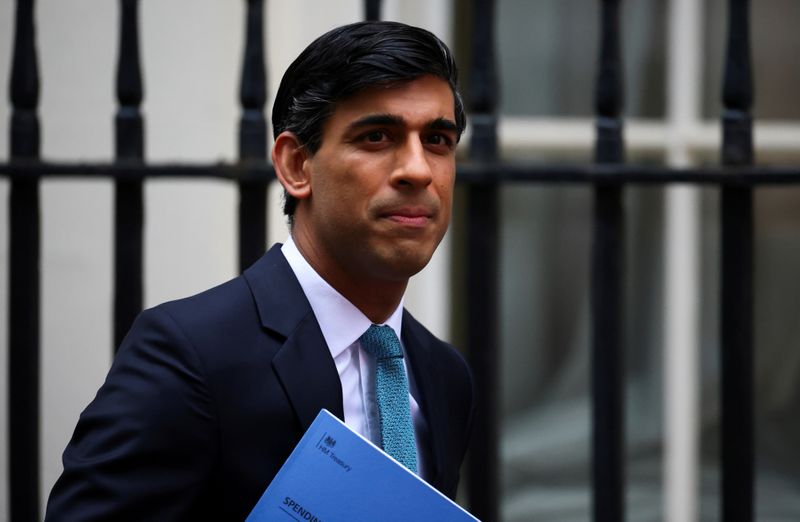 By William Schomberg and David Milliken

LONDON (Reuters) – British finance minister Rishi Sunak said on Sunday he would not rush to fix the public finances as he readied a budget plan which will pile more borrowing on top of almost 300 billion pounds ($418 billion) of COVID-19 spending and tax cuts.

Sunak, who is due to deliver his budget to parliament on Wednesday, promised to help the UK economy through a gradual lifting of lockdown measures that will last at least until late June. But he also said he would “level with people” about how Britain’s 2.1 trillion-pound debt pile would carry on growing without action.

“But it’s important … to also have strong public finances over time.”

Sunak declined to comment on specific tax moves – including a widely reported plan to raise corporation tax – ahead of his budget speech.

He also would not say if he would stick to his Conservative Party’s promises made in 2019 – before the pandemic – not to raise the rates of income tax, value-added tax or national insurance contributions, the biggest sources of tax revenue.

The Sunday Times said Sunak was planning to raise income tax revenues by 6 billion pounds by freezing the point at which people start paying the basic rate of income tax and the threshold at which they begin paying the higher rate.

Britain has suffered the biggest COVID-19 death toll in Europe and the heaviest economic shock among big rich countries, according to the headline measures of official data.

In response, Sunak has racked up the country’s biggest ever peacetime budget deficit to protect jobs and help businesses, and to increase funding for health and other services.

“We went big, we went early, and there’s more to come and people should feel reassured by that,” Sunak told BBC television.

Businesses such as shops, bars, clubs, hotels, restaurants, gyms and hair salons will be offered 5 billion pounds of additional grants, the government said on Saturday.

But Sunak also raised the prospect of a fiscal reckoning to prepare Britain for future economic shocks and he noted a recent rise in the cost of borrowing from record lows as debt markets worldwide price in more inflation from the global stimulus push.

“Interest rates have been at very low levels, which does allow us to afford slightly higher debt levels,” he said.

“But that can always change and we’re seeing that in the last few weeks,” he said. “We have to be acute to that possibility.”

“We are an outlier both in terms of having had the worst economic crisis of any major economy but now also in having a government that seems to be focused on increasing tax right now on families when other countries have focused on securing the recovery,” its finance spokeswoman Anneliese Dodds said.