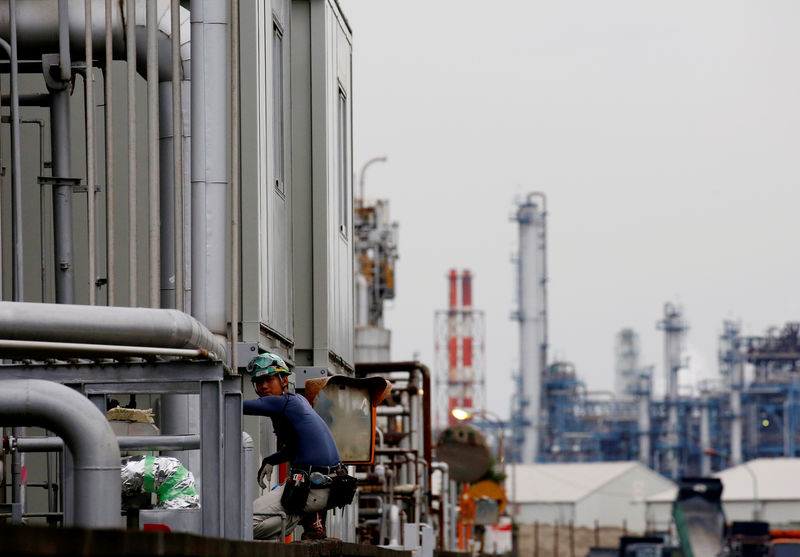 © Reuters. A worker is seen in front of facilities and chimneys of factories at the Keihin Industrial Zone in Kawasaki

TOKYO (Reuters) – Japan’s factory output is expected to have slipped for a second straight month in December, a Reuters poll found on Friday, in yet another sign slowing global demand and trade frictions would hobble the economy for much of this year.

Industrial production was forecast to fall 0.4 percent in December from the previous month after a 1.0 percent decline in November, the poll of 16 economists showed.

“Exports are at a standstill because external economies are slowing down, so there is a chance that the factory output will stagnate.”

Worries are growing about the repercussions on Japan’s economy from trade frictions between the United States and China. Already, there are indications businesses will be facing increasing pressure to safeguard margins and profits, with Japanese exports in December falling the most in more than two years, dragged by plummeting shipments to China.

The world’s third-biggest economy contracted in the third quarter and though a recovery is widely expected to have taken root, many analysts believe the external pressure will keep growth below-par.

“Exports of semiconductor manufacturing equipments and autos are weakening especially to China amid the global economy is decelerating,” said Asuka Sakamoto, economist at Mizuho Research Institute.

Next week’s data also include Wednesday’s retail sales, which is forecast to increase 0.8 percent for December from a year earlier, the poll showed, slowing from a 1.4 percent rise in November.

Decline in prices for gasoline and food weighed on the retail sector, while sales of winter clothing underwhelmed due to warm weather, analysts said.

A slowdown in retail sales, which track the performance of department stores, supermarkets and convenience stores, would add to the worries about a hit to consumption from a planned sales tax hike in October.

The poll predicted the nation’s jobless rate fell to 2.4 percent in December, improving from 2.5 percent in November, and the jobs-to-applicants ratio was seen steady at 1.63 last month, not far from over 40-year high at 1.64 marked in September.