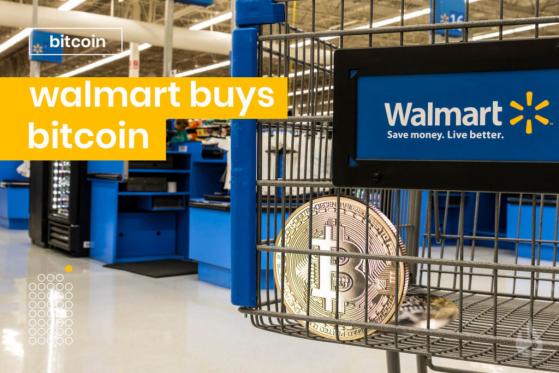 Is Walmart Buying Into Bitcoin?

Rumors have it that Walmart (NYSE:) has purchased or is planning to in the upcoming quarter. While the information is still just speculation, many publications have rushed to try to confirm or debunk the myth. According to some, the mega-corporation is set to purchase over $1 billion worth of Bitcoin, and their investment will come to light in their next quarterly report.

According to a press release on their website, Walmart will report its Q1 earnings on May 18. The giant retailer is the world’s largest company by revenue. It generated over $559 billion in the last year, is publicly traded on the NASDAQ, and has expanded its operations into over 24 countries. If the news about the Bitcoin investment proves to be accurate, it will mark a major milestone and generate more exposure for the cryptocurrency to a mass audience.

Why Would Walmart Buy Into Bitcoin?

The usability of Bitcoin is well-known among enthusiasts, and now corporations are staking their interest in the cryptocurrency. The author of Bitcoinmagazine emphasizes that using Bitcoin could improve Walmart’s financial operations, as it sources products from more than 100 countries.

Bitcoin’s value resides in its ability to process payments faster and more effectively, without the need for a middleman. For Walmart, this would decrease transaction costs substantially as it would not have to deal with currency conversions.

Cryptocurrencies have entered a bull run which started in late 2020, and Bitcoin has been at the forefront of it. Its consistent rally to hit a new all-time high in 2021 created an incentive for business entities to consider Bitcoin as a store of value. Walmart may see the leading crypto as a possible long-term investment, given that the market is beginning to be less volatile. What’s more, other institutions such as Tesla (NASDAQ:) and Visa (NYSE:) are reinforcing the belief that Bitcoin is more stable through their investments.

Walmart entering the crypto space will make Bitcoin known to the blue-collar American workers who make up its core client base. As Bitcoinmagazine has highlighted, BTC payments can be a plausible reality within the corporation and for its customers. This will only improve the perception of cryptocurrencies, helping them to diversify into a different area of the world: the regular user.

Retail investors only constitute a small part of the total Bitcoin transactions; however, their entry into the market will generate a big leap in Bitcoin adoption. This, in turn, will force institutions to become more aware and increasingly accept BTC as payments.

Bitcoin’s market penetration has always been undermined by a lack of institutional support. The currency won’t see mass adoption until larger institutions and governments normalize it as a means of payment. The new market sentiment, however, indicates that more institutions are noticing Bitcoin as a legitimate investment.

The cryptocurrency market is still characterized by volatility; however, recent price variance doesn’t compare to the early crypto boom of 2017. Corporations buying into Bitcoin and backing the cryptocurrency have created a more trustworthy environment, bringing further adoption.

Companies such as Microstrategy (NASDAQ:), Square, and Tesla have been vocal about their Bitcoin investments in recent months. The price of Bitcoin did not consolidate with their investments, but it spiked up shortly after Elon Musk announced Tesla’s $1.5 billion BTC purchase. What’s more, publicly traded Chinese app company Meitu recently announced another crypto acquisition and now holds $100 million worth of BTC.

All the corporations that have invested in Bitcoin are recognizing the value it can add to their companies. Whether they are aiming to use BTC for payments or investing for the future, Bitcoin’s value in the long term is undisputed. As early adopters, if their investment pays out, they will be generating more revenue once BTC becomes accepted at a macro level. In their opinions, the gains outweigh the risks associated with investing in Bitcoin. As history has repeatedly shown, Bitcoin has always managed to rally to newer highs after each crash.