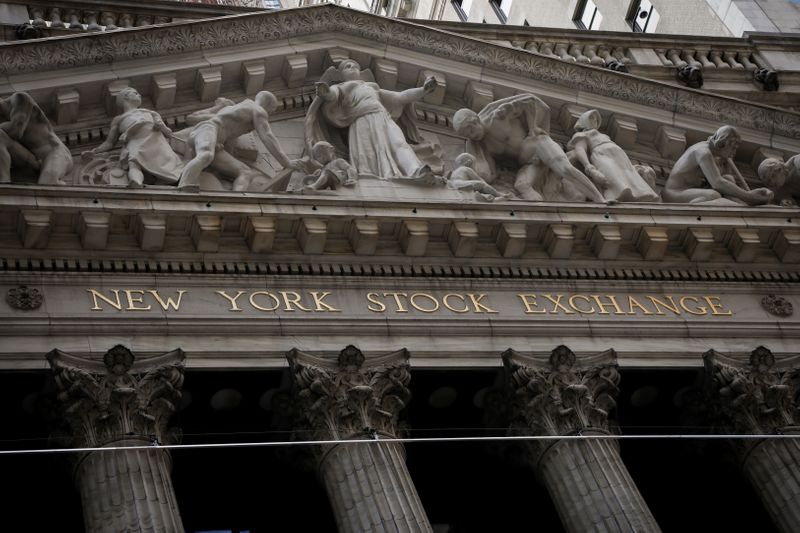 © Reuters. The front facade of the of the NYSE is seen in New York

By Medha Singh and Shivani Kumaresan

(Reuters) – U.S. stock index futures extended losses on Thursday as high levels of weekly jobless claims suggested a slowing recovery in the labor market, while talks in Washington over a stimulus deal dragged on.

The number of Americans filing for state unemployment benefits last week dropped more than expected to 787,000, but remained stubbornly high as support from fiscal stimulus faded.

“There is still hope for stimulus talks, but the market is getting more and more unsure whether or not it’s going to happen,” said Robert Pavlik, chief investment strategist and senior portfolio manager at SlateStone Wealth LLC in New York.

“Anybody who is realistic about it realizes that the stimulus is not going to come until sometime after the election.”

President Donald Trump on Wednesday accused Democrats of being unwilling to craft an acceptable compromise for a coronavirus aid bill, despite reports of some progress earlier in the day.

It was unclear whether the negotiations would continue or go dormant until after the Nov. 3 presidential and congressional elections.

All eyes will be on the final presidential debate on Thursday night, where Trump will attempt to change the trajectory of the race that Democratic challenger Joe Biden seems to be leading in national polls.

From hate speech to nudity, Facebook’s oversight board picks its first cases By Reuters